Nicoletta Confalone: ‘A comparison between the Rossiniane by Mauro Giuliani and the Belliniane by Emilia Giuliani’

Gerhard Penn: ‘Guitar Compositions by Leonard Schulz in the Repertoire of Giulio Regondi’

Jelma van Amersfoort: ‘The Great Transformation of the Guitar Concert’

Damián Martín: ‘The True Identity of Don ***. A Mystery Solved’

Jukka Savijoki: ‘Chamber music for guitar of the first decades of the 19th century’

Papers presented by the Cohort for guitar research in 2019

A meeting of the cohort for Guitar Research was held In the Board Room, first floor, the Faculty of English, 9 West Road, Cambridge, on 13-15 April, 2019. The papers delivered were:

Reggie Lawrence: ‘Envisioning Editions for the Guitarists of Tomorrow’

Augusta Hervey (1846-1927) and her first cousin Lady Mary Hervey (1845-1928) started their ‘Ladies’ Guitar and Mandoline Band’ of aristocratic women in 1885 in London which performed at charity functions until the close of the century. This presentation considered Augusta’s life and career as a pianist, guitarist and writer.

A five course guitar, made in 1760 in Amsterdam by Gosewijn Spijker (c.1706-1781) was found in the collection of Dutch castle Duivenvoorde a few years ago. It is probably the oldest surviving guitar made in the Netherlands. Jan en Jelma have been working together to research the instrument’s provenance and the turbulent life of its maker. Together they have performed a detailed analysis of the instrument, which has led to the construction of a playable and historically accurate replica.

Ferdinand Rebay (1880-1953) was a pioneer among the non-guitarist composers who started to write for the instrument in the 1920s. However, in spite of having composed more than 150 guitar works, he is today undeservedly obscure. This paper examines his more than 30 sonatas or sonata-structured works, most of which is made of chamber music for combinations that range from duos to a septet. The goal is to situate Rebay’s chamber sonatas within the guitar repertoire, understanding it as a unique Viennese chamber-music branch of the so-called “twentieth-century guitar renaissance”.

Emilia Giuliani, born into art, is a typical guitarist-composer in the first half of the nineteenth century: first she was a child prodigy, then an extraordinary and highly admired virtuoso, according to the journalistic chronicles, and at the same time an author of music for her instrument.

In her compositions her father Mauro’s teaching is evident, which sometimes becomes a true quotation, but more often it appears as an original and excellent instrumental sensitivity, which makes her capable of finding new writing solutions, perfectly aware of the guitar’s character. Moreover, Emilia was a woman, and in the first half of the nineteenth century, a woman who is capable of being a professional musician is almost a chimera, with only one exception; singers. Finally, Emilia, in spite of herself, had a life fit for a novel, short and difficult, and perhaps the dimension of the novel is the one that can do justice to her, making her an emblematic example of the difficulties being a woman and a guitarist in that era.

Samantha Muir: ‘Evoking and Revoking the Rustic Idyll: The Machete of Madeira in the 19th Century’

Nineteenth century travel literature on Madeira by British and American writers gives a rare and colourful insight into the machete – a small, four string guitar ‘particular to the island’. In spite of social and economic hardship Madeira was repeatedly portrayed as a ‘Paradise in the Atlantic’ inhabited by happy, machete playing peasants. My paper looks at how evoking the rustic idyll was used to enhance the appeal of Madeira in literature largely aimed at invalid tourists. This, however, was a limited view of the machete.

As evidenced by for example the music of Candido Drumond de Vasconcelos (1846) the machete was also used as a classical instrument. The extent to which it was played and known remains a topic for study, but from letters by the Phelps family of Madeira it is known that in Madeira he taught the young Clara Phelps, who went on to perform as an amateur machete player in England.

The Catalan guitarist Miguel Llobet (1878-1938) was arguably the leading classical guitarist in the first decades of the twentieth century. This paper discusses Llobet’s involvement in the early-music scene in pre-WWI Paris and questions of performance style in one of his recordings of music by Bach. Ideas from Albert Schweitzer’s influential book J.S. Bach: le musician-poète (1905) provide a theoretical background for the empirical analysis.

In 1819 an obscure guitarist named D. Joly published in Lille (France) a method that included several astonishing approaches of guitar technique mainly for the right hand, such as a new system to play the scales, a system to prepare the thumb when not playing, and even examples of the use of the little finger of this hand playing notes. The research shows altogether new information and theories about the life of this guitarist connecting him with musicians and events of this period.

James Westbrook, ‘Beyond Six Strings: nineteenth-century attempts to increase the compass of the guitar’

Jelma van Amersfoort, ‘Teaching and Learning the Guitar in the Netherlands (1750-1810)’

Christopher Page, ‘The Peninsular War of 1807-1814 and the vogue for the guitar in Regency England’

Thomas Heck, ‘Collective Thinking at the Service of Guitar Iconography: How Does ARTSTOR help?’ 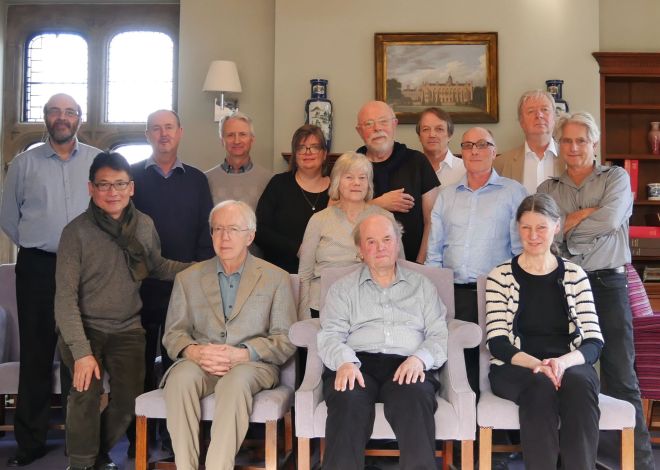 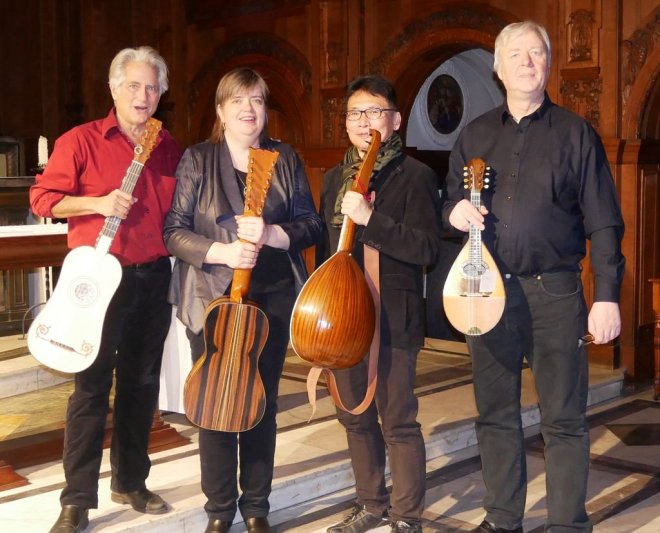 Taro Takeuchi ‘The Regency lute and its music’

Reggie Lawrence ‘The Almost-Invisible Elephants of the Guitar’

Nicoletta Confalone ‘In search of the lost guitar: Limits and actuality of the Schubertian Lieder’s Nineteenth-century transcriptions’

Discussion in the Old Library. Photo by Nicoletta Confalone 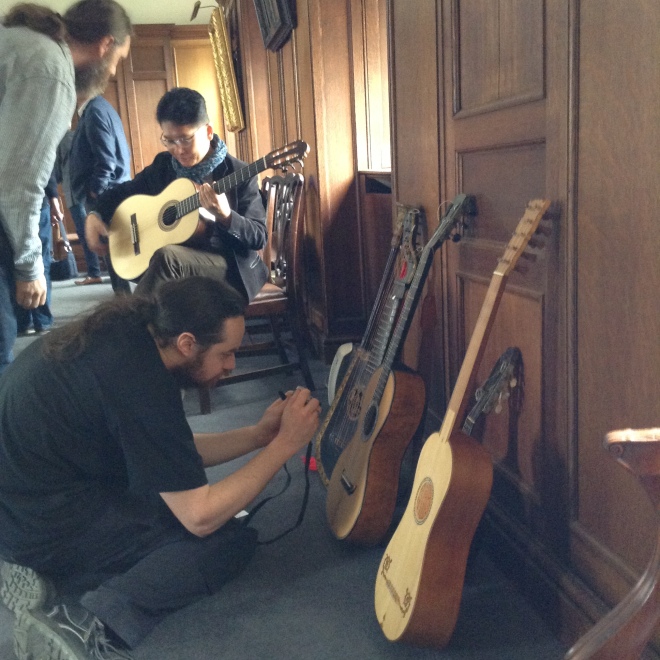 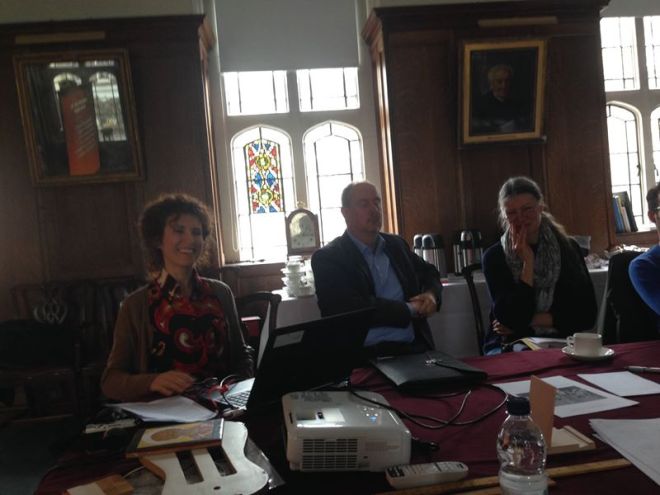 Jelma van Amersfoort, ‘Guitar and cittern making in the Netherlands in the 18th century’

Erik Stenstadvold, ‘An unknown pupil of Sor: the life and career of Mariano de Castro’

Brian Jeffery, ‘The Spanish military guitar in the Peninsular War’

Thomas Heck, ‘Historiography of the Guitar: Texts and Contexts’

Vinciane Trancart (Andrew Britton Fellow), ‘The Guitar and Banal Nationalism during the Restoration in Spain’

Panagiotis Pouloupolos, ‘The Harp, Lyre, Lute, Cittern, and Guitar around 1800’

Christopher Page, ‘The guitar and the sofa’ 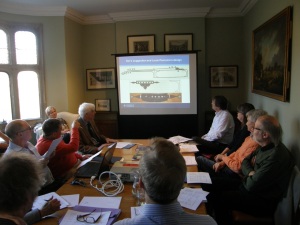 Paul Sparks, ‘When did the mandolin and guitar first become a ‘natural’ pairing?’

James Westbrook, ‘The kinds of Guitar Sor may have played and envisaged when he composed’

Christopher Page, ‘The Light Guitar: six strings on the move’

Erik Stenstadvold, ‘The struggle for recognition – the guitar and the prejudices of the musical establishment’ 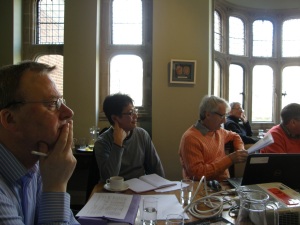 James Westbrook, ‘Louis Panormo: ‘The only Maker of Guitars in the Spanish style’

Jelma van Amersfoort, ‘The notes were not sweet till you sung them: 19th century French vocal romances with guitar accompaniment’

Andrew Britton, ‘The Guitar and the Bristol School of Artists’

Panos Poulopoulos, ‘The origins of the viol-shaped guitar DM69731 in the Deutsches Museum’

Christopher Page, ‘The guitar and the poor in late-Georgian England’